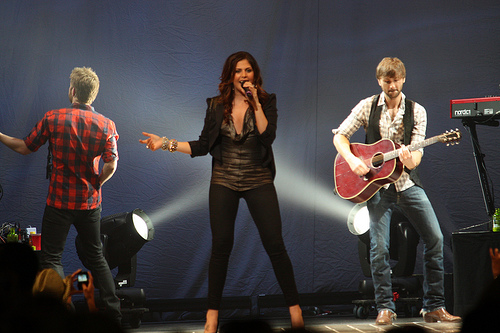 Country pop group Lady Antebellum are trio Hillary Scott, Charles Kelley and Dave Haywood who formed in Nashville, Tennessee 7 years ago in 2006 and since then have risen to massive commerical and critical success winning many music awards including seven Grammy’s and selling 12.5 million singles and 10 million albums in the States.

American singer-songwriter Kip Moore released his debut album in 2012 entitled Up All Night which peaked at no.3 in th US Country charts and no. 6 in the Billboard 200. Moore is one the rising stars of country music and has released four singles.

Completing this country music event is singer-songwriter Kacey Musgraves, who previously toured with Lady Antebellum in their UK tour in 2012. Having released four studio albums, with the latest 2013 album entitled “Same Trailer Different Park” reaching no.1 in the US Country charts, Musgraves has achived commerical success and won the CMA Awards New Artist of the Year for 2013.