Walnut Creek Amphitheatre (Coastal Credit Union Music Park at Walnut Creek) is a beautiful outdoor music venue in Raleigh, North Carolina and plays host to some of the biggest bands and artists in the world. It originally opened on July 4, 1991 and was built by the City of Raleigh. The amphitheatre has a capacity of 20,000 making it an ideal venue for large summer events. 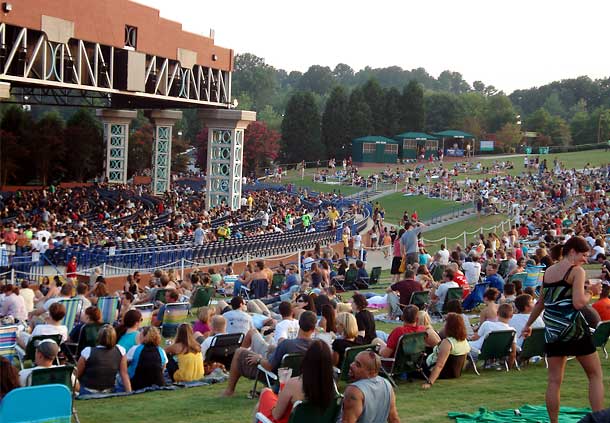 With the intention to host large concerts during the summer from the biggest artists and bands from the United States and around the world, Walnut Creek Amphitheater has over twenty years of live music history.

Constructed by The City of Raleigh in 1991 and covering 77 acres the total cost for building the venue came to $13.5m. The seating capacity is 6,847 with approximately half that being under cover, while lawn holds a further 13,653 bringing the total capacity of the venue to 20,500.

Get to the exit point at least 1-2 hrs before the start of the show you are attending to avoid traffic delays that can occur for some events.

With nine parking lots at the venue there is plenty of space for attendees and parking is including when you buy a ticket. However for Premier parking near the gates there is a $20.00 fee.

Picnics are welcome before the show, and alcoholic drinks are available within the venue.

The venue has accessible seating.

For maximum enjoyment for the entire audience you can bring the following items into the venue; blankets, seat cushions, backpacks, ponchos/rain jackets, umbrellas (small size only please), binoculars, water (one sealed bottle of water per attendee), strollers (welcome on the lawn but not in the reserved seating area and can be checked in at the Guest Service Booths) and low sitting lawn chairs (seat no higher than nine inches off ground).

Personal cameras are allowed but no flash photography, video and removable lens cameras without the approval of the venue.

Children under the age of two are allowed free of charge but must sit in the adults lap and not use additional seating.

The venue is outdoors and all events are rain or shine.

You can find a list and description of the upcoming concerts showing at Walnut Creek Amphitheatre here as well as buy tickets (where available), find the address, get contact details and see the seating chart. You can also get updates on the latest concerts by following us on our Twitter.